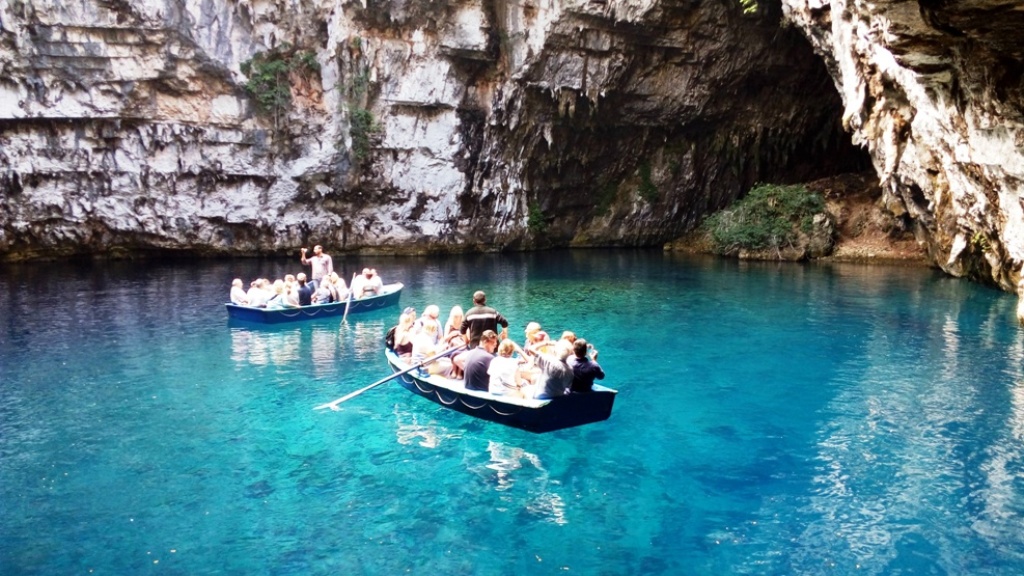 Melissani Lake lit up by the sun

Fascinating Melissani Lake is one of the most beautiful sites on Kefalonia. Situated in a cave, it was researched in 1951 by the well-known speleologist Yiannis and his wife Anna who entered the cave with ropes through the cave’s opening above the lake. At that occasion, they found an oil lamp on the small islet which separates the cave into two parts.

When the archaeologist Marinatos excavated the islet in 1962 he found several artefacts from the 4th and 3rd century BC which suggest that this islet was a place of worship, dedicated to the god Pan and the nymphs. Among other finds, there is a figurine of god Pan as well as a clay plate, showing dancing nymphs.

In mythology nymphs are minor goddesses, associated with nature; with forests, mountains, grottos and most of all water: rivers, lakes, springs and the sea. They are depicted as beautiful, young women being companions of the gods. So it is not surprising that according to local legend a nymph called Melissanthe committed suicide in the lake when god Pan rejected her love for him.

Melissani is part of a geological phenomenon; north from Argostoli is a place called Katavothres, which means as much as sinkholes or swallow holes. At this place, seawater flows into these sinkholes and disappears in the ground. The flow of the water had been used to operate two water mills in the area. The first one was installed in 1835 during the English protectorate.

For a long time, people had tried to figure out where the seawater flows to until in 1963 Austrian geologists found out by pouring dye into the water, that the seawater which disappears in the ground, crosses the island underground and reappears after 14 days on the other side of the island, flowing through lake Melissani at one metre above sea level and from there back into the sea.

But most important: the beauty of Melissani Lake

Part of the cave’s roof collapsed a few thousand years ago due to an earthquake. The daylight falls through this opening, showing the colour of the lake in its deep blue.

As soon as the sun stands high above the lake, the sunrays lighten up the crystal clear water to an unreal bright turquoise. So the best time to visit Melissani is around noon.  The water is so clear that you can see the ground even at its highest depth of 30 metres. Keep an eye out for eels in the lake.

In 1963 a short tunnel was created to give visitors access to the lake. Rowing boats are waiting for you when you reach the lake at the end of the tunnel. By boat you will be taken over the lake to the closed part of the cave, passing the islet where the excavations had taken place. At the walls, there are Stalactites and flowstones with bizarre shaping, some with a resemblance to dolphins, as the boatman will point out, as dolphins play a role in mythology.

The lake is about 164 metres long and 35 metres wide. If you taste the water you will notice that it is brackish water, 60% seawater and 40% freshwater. The seawater, coming from Katavothres, is enriched by the many underground freshwater deposits in the karsts and enters Melissani Lake, flowing through the lake to the closed part of the cave, where it exits the cave on its way back into the sea.

How to get to Melissani Lake

Melissani is situated between Sami and Agia Efimia, in the village of Karavomilos. Coming by car from Argostoli, take a left turn just before you enter Sami. This road will bring you to Karavomilos. Before you leave Karavomilos you see the post sign for Melissani on the left. Turn left here, after a few metres cross the small bridge to the right and you will see the parking next to the cafeteria and the entrance.

Coming from Agia Efimia, driving towards Sami, turn right to Melissani when you reach Karavomilos.

If you do not have your own transport, check the schedule of the local bus company (KTEL). In the summer they have Melissani in their bus schedule as described in With local buses to the Kefalonia highlights.

A final tip: if you want to enjoy Melissani lake without crowds plan your visit on a day with no cruise ship arrivals. You can check cruise arrivals on the cruise timetable Argostoli.

The second cave, not far from Melissani, is the Drogarati stalagmite and stalactite cave.